The flags on board

Etiquette in the use of flags is considered a cornerstone in the seafaring tradition.
In addition to the flags required by the international code for signaling between vessels, there is still a fundamental question to be explored:

Each boat or position on land must hoist the flag relating to its nationality at dawn, which will be the largest of all. This serves to communicate to anyone who may see us that the boat / base is awake and operational. This same flag will be lowered and returned at sunset, when, even if the base does not cease its activities, it is useless for it to be left flying as no one could see it in the dark. On a boat, this flag must always be displayed and as far aft as possible. The flag expresses the nationality of the boat but not necessarily that of the owner. 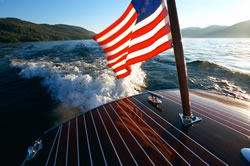 The courtesy flag, on the other hand, is the flag that is "good practice" to hoist when navigating waters or districts other than those of our national flag: (eg in Croatia a boat flying the Italian flag must display the Croatian flag).
For motor boats it is hoisted on the stem, for sailing boats it must be hoisted to starboard on the outside, while for boats with more than one mast it will be hoisted to the main spreader line on the starboard side of the mainmast .

Note that a boat flying a non-Italian flag in Italian waters, the courtesy flag is the one shown in the photo and NOT the one used for pleasure purposes (the one with the coat of arms of the maritime republics)!

The owner's flag is the flag that distinguishes the owner and can be freely chosen as long as it does not resemble flags already in use. On center mast motor yachts, the inboard part is hoisted to port; on boats equipped with a single mast, it is hoisted to the main left spreader; on those with several masts to the main left spreader of the mainmast; or, if there is no spreader, on two-masted ones, on the forward mast, on three-masted ones on the aftermast. It is hoisted when the owner climbs and lowered when he descends. It must always leave its place if a high authority is embarked on the boat (head of state, prince, etc.) or out of courtesy if there is a senior captain on board, in whose place the relative flag is hoisted. 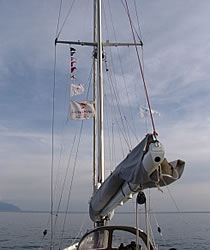 It is the banner of the Nautical Club in whose registers the pleasure boat is registered, or of the Club to which the owner of the boat is associated.
It is not good practice to raise the banner of more than one club at the same time. Unlike other flags, it is permitted to remain ashore day and night, whether the boat is at anchor or underway. The corporate keeper is lowered only when the vessel is laid up. On boats without masts it is hoisted to the bow rod; on motor yachts with a central mast, it is hoisted on the starboard side; on those equipped with one or more masts, at the head of the main mast. For boats with a single mast, on the head of which a radio antenna is installed, it is permitted to hoist the company guidon on the main starboard cross. In this case, when navigating in foreign waters, the corporate pennant must be replaced by the courtesy flag. Therefore it is moved to the main left cross, together with any owner's flag. With the Gran Pavese ashore, the corporate pennant must be hoisted to the main starboard cross of the mainmast.

the corporate banner of the Italian Naval League

When entering a foreign port, it may sometimes be required by local legislation to place the yellow flag on the main left cross, which corresponds to the letter "Q" of the international code of signals. This flag, formerly called "quarantine", corresponds to a declaration made to the maritime authority of the port of arrival, that the crew is in perfect health conditions and that "free practice" is required, i.e. permission to moor and land. Quebec
My ship is unscathed
and I ask for free practice

It is formed by the flags of the "International Code of Signals" in alphabetical order and is hoisted on the occasion of parties or galas.
It extends from the very bow to the very stern passing at the head of all the masts.
The term "Gran Pavese" which usually indicates the "Gran Gala di Bandiere" used to adorn ships on particular solemnities, has uncertain origins as it cannot be associated with historically documented events or regulations. The word "Pavese" itself is been used over time by various authors to indicate "a shield as a defensive weapon" or "strips of wool of various colors" or "oilcloths to cover the cots", etc. etc... 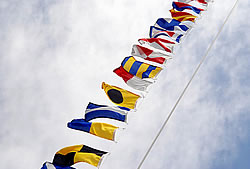 HOW TO PLACE THE FLAGS IN THE GRAN PAVESE:

For boats equipped with two sets of alphabetic flags: from bow to stern: 2^ Substitute, Intelligence, A, U, J, S, 3, R, L, T, H, 2, I, Y, V, N , 4, W, P, Z, K, 5, X, O, M, B, 1 (middle position); then B, M, O, X, 5, K, Z, P, W, 4, N, V, Y, I, 2, H, T, L, R, 3, S, J, U, A, Intelligence , 2nd Substitute. The Intelligence and 2nd Substitute pennants must hang (held in this position by a sounding lead) below the bowsprit or bow and flagstaff
National or stern. The distance of the flags must be established in a uniform manner in relation to the length of the unit, as well as the number and height of its masts, so that the two pennants at each end of the Gran Pavese assume the position specified above. At the head of each mast a National Flag shall be flown, of a smaller size than the National Flag hoisted at the stern mast.

Vessels that do not even have a complete set of signal flags use the Piccolo Pavese instead of the Gran Pavese, consisting exclusively of the National Flag raised at the masthead.
The Gran Pavese must be raised from bow to stern, at the same time as the National Flag, and lowered after it.
It rises for the first time at the time of launch; it is subsequently raised, only while in port, on the occasion of national holidays of its own or of the host country, or, at the specific request of the local maritime authorities, on the occasion of celebrations in the mooring port, such as patronal celebrations, official inaugurations, various naval units, visits by high personalities.
If a foreign anniversary is celebrated, in addition to one's own National Flag, that of the foreign nation is raised at the masthead, or on the mainmast, the National Flag to the left, the foreign one to starboard on the same auction.

Find out what our customers say about us; this is our best reference!