Starting from that date, the newly built pleasure craft, in order to be marketed within the Community territory, regardless of the country in which the construction took place, must bear the CE marking. The country (EU or third party) in which the construction took place is not important, but it is important to possess the requisites envisaged by the Directive and certified with the CE initials.

The cataloging philosophy is based on the free movement of goods, as well as people and services. For this reason, today, no European Union state can prevent the entry into its territory of a CE marked product nor can it refuse its marketing, unless you want to make use of the safeguard clause (the only defense weapon for Member States), if the suspicion arises that this product is not actually manufactured in such a way as not to endanger the safety and health of people or the environment, the latter principles being valid for all products bearing the CE mark.

For pleasure boats, the mark is attested by a plate fixed to the hull which also shows the manufacturer's code, the particularly important design category for the use of the unit in the various weather and sea conditions, the maximum capacity recommended by the manufacturer (weights on board) as well as the number of people the unit was designed to transport. 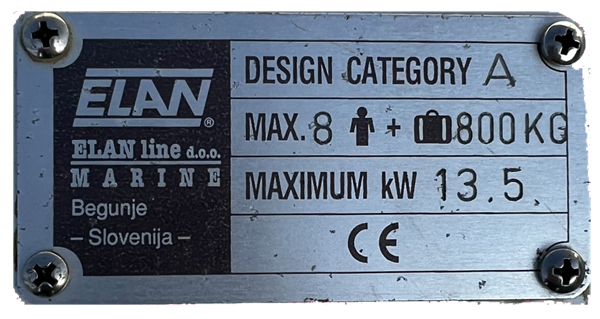 Here are the 4 categories in detail:

(*) The Beaufort scale is used to measure the force of the wind
(**) Significant wave height means the average height calculated considering one third of the greatest wave heights observed in a given period.

The assessment of the marine weather elements is made by the skipper who also assumes responsibility for using the unit within the limits of the design category assigned by the builder, according to the instructions given in the owner's manual.

The Hull Identification Number (HIN), i.e. the serial of the CE marking, is also shown on the hull of the boat:

FIELDS LEGEND OF A HIN SERIAL 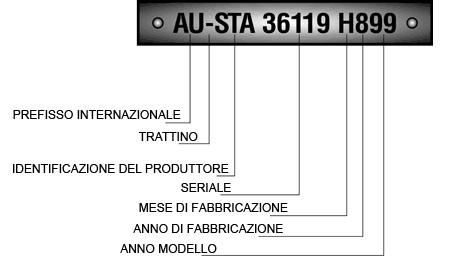 This boat has the letters GB for Great Britain. The letters FLN indicate the brand. 12345 offers a serial number for the boat. H indicates the month the lei was built: A is January, B is February, C is March, D is April, etc. The six indicate that the boat was built in 2006 but the 07 indicates that she is a 2007 model year boat.
Boat manufacturing years are not January to January, so this is very common.

This boat has US to mean US.
The letters BL offer an indicator of Bayliner branding. BN for factory reference.
1234 becomes the boat's build number. J is the 10th letter of the alphabet, so this boat was built in the 10th month of the year, being October.
It is a boat of production year 2019 but built in 2018.

Boats built before June 17, 1998 do not have a CE marking and in case of registration they must be certified by a competent body.

Find out what our customers say about us; this is our best reference!